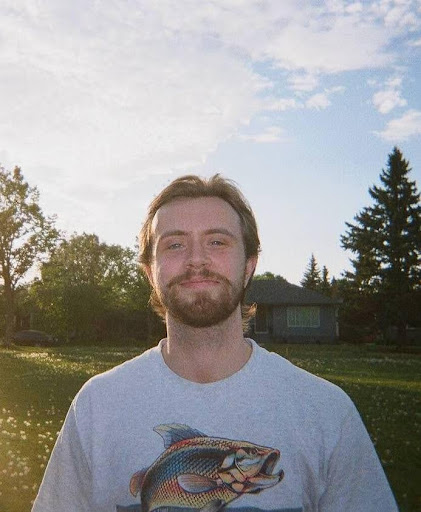 A Winnipeg Based Filmmaker

Ethan Billard Dooley is an emerging member of Manitoba’s film industry, and an active contributor to the short film community in Winnipeg.  Since starting out in highschool, Ethan has written, directed, produced and edited dozens of short films. He has continuously advanced his visual storytelling skills ever since.

One of his most recent works - “August Long” - was voted one of the top films at the 2020 University of Winnipeg Film Festival, and is awaiting notice of acceptance into several other festivals.
‍
A film Ethan edited recently, “The Flexed Arm Hang” won awards at festivals such as the Paris Film Festival, Indie Short Fest, Independent Short Awards.

The last movie he filmed/ edited, a feature film adaptation of the play "Be More Chill", directed by Brenda Gorlick, recently premiered at the park theatre.
‍
Ethan holds a bachelor's degree in filmmaking from the University of Winnipeg. He is always looking to learn more and work on his craft . Currently, he is taking part in Creative Manitoba’s mentorship program, being mentored by director Sean Garrity.
‍
Ethan began working on union films in 2019, spending time in several departments, from assistant director to set dresser. He takes the knowledge gained from these experiences into every job he does, director or not.
‍
Beyond filmmaking, Ethan speaks Spanish and has a love for languages, and cultures outside his own.

Ethan Billard-Dooley is a Winnipeg-based filmmaker (writer, director, editor). He always has a project in the works. If you love film, drop him a line and talk to him about your next project.
Copyright© 2022 Ethan Billard Dooley. All rights reserved.